Today our TA, Anna, presented a brief overview of the role that narrative can play in the design process, using her master’s thesis work in designing for patient-centered healthcare as a context for framing the discussion.

Anna’s thesis aims to address the communication gap that exists between members of the medical community & healthcare industry, and their patients. Specifically, she has been looking at the differences in how doctors & patients tell narratives about chronic & terminal illness, as well as severe injury.

The research began with an overview of narrative & dramatic structure. Speaking in very general terms, stories can be distilled to a pattern articulated by Aristotle, displayed below:

Anna described how the stories that patients and medical practitioners tell surrounding illness can either be mapped-to this arc, or (more frequently) break the mold. 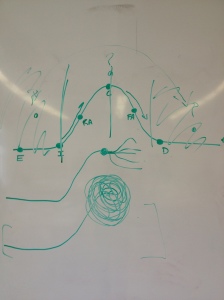 The first photograph depicts three common narratives found in illness, according to the work of Arthur Frank. The top, which looks quite like a traditional Aristotelian narrative, is called a ‘restitution’ narrative, and chronicles the journey from well, to sick, to well once more. The second pathway is referred to as a ‘quest’ narrative, and occurs when a person uses their illness as a jumping off or branching point in their story–a motivator to achieve something new. The last line is a ‘chaos narrative’: a difficult situation in which a person stops being able to process their own situation, becomes lost in both space and time, and usually suffers significant anxiety about a life derailed.

In general, it often seems that the medical community in the US tends to understand illness narratives as following the first case, when in truth the first case is rarely the norm, and honestly is not even realistic — nobody returns to the same state that they started after a significant medical event. People grow and evolve based on their experiences. The relationship between doctor and patient also only allows the physician to glimpse a small window of the patient’s story, which can lead to medical decisions that are seemingly arbitrary and at times misinformed.

Anna hopes that learning more about the ways in which patients understand their stories can aid designers in creating systems to encourage reflection, discovery, and sense-making for those suffering from illness & injury, and to facilitate difficult medical discussions between patient and doctor by extending the window of interaction.

Anna also discussed some of her experiences interviewing people for her thesis.

After this introduction to the role of narrative in design, the class discussed the ways they could incorporate narrative into their own work in the course. The second photo depicts a brainstorm of what narrative — as well as user interviews at a broader level — can bring to the design process. Several common design methods and their situational uses were considered. The students then began to organize and schedule user interviews with several stakeholders in the area of child-access-protection laws and gun control.