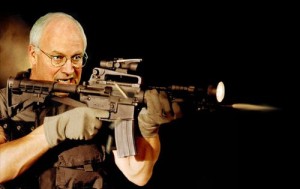 Something to think about: Dick Cheney shot a man accidentally while hunting. Instead of being concerned for the person shot. People laughed about it, making fun of Cheney and photoshopping several different photos, however, no one really reflected on the idea that they were laughing at someone being shot and hurt, even me.

We’ve been so conditioned to see guns in movies and media, that they seem very normal, but from those movies they’re categorized in so many different ways that it’s hard to truly understand what we think of them. They’re sexy, dangerous, powerful, scary, protective.